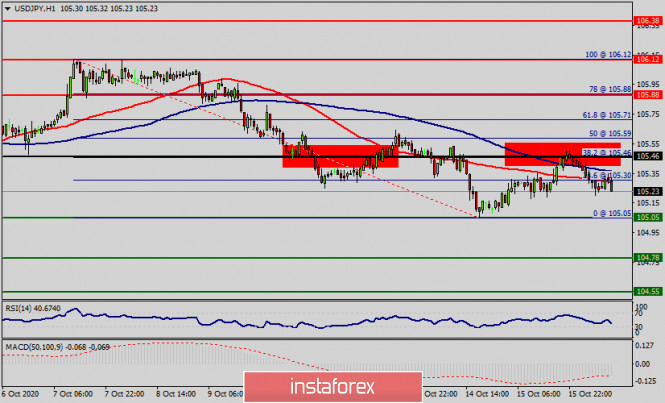 On the one-hour chart, the USD/JPY pair continues moving in a bearish trend from the resistance level of 105.46.

The USD/JPY pair has broken support at the level of 105.46, which acts as resistance now. So, the pair has already formed minor support at 105.46.

Currently, the price is in a bearish channel. This is confirmed by the RSI indicator signaling that we are still in a bearish trending market.

Therefore, there is a possibility that the USD/JPY pair will move downside and the structure of a fall does not look corrective.

The trend is still below the 100 EMA for that the bearish outlook remains the same as long as the 100 EMA is headed to the downside. Moreover, the moving average (100) starts signaling a downward trend; therefore, the market is indicating a bearish opportunity below 105.46.

If the USD/JPY pair fails to break through the resistance level of 105.46, the market will decline further to 105.05 as as the first target.

Immediate resistance is seen around 105.46 levels, which coincides with the weekly pivot.

Also, the double bottom is seen at the level of 105.05. If the trend is buoyant, then the currency pair strength will be defined as following: USD is in an uptrend and JPY is in a downtrend.

However, if a breakout happens at the resistance level of 105.88, then this scenario may be invalidated.

On the other hand, if the pair closes above the minor resistance (105.46), the price will fall into the bullish market in order to go further towards the strong resistance at 105.88.

Overall, we still prefer the bearish scenario which suggests that the pair will stay below the zone of 105.46/105.88 to day.

Technical Analysis of ETH/USD for October 20, 2020