Since today is the last trading day of the week, it is better to carry out the analysis of the GBP/USD pair on Monday when the trading week will actually end. Today, however, let’s focus on the euro/pound cross rate which has been ignored for a long time. I assume that in the light of the upcoming end of the Brexit saga this instrument will become even more attractive especially to those investors who use it in their trading.

The most acute issue remains COVID-19 which is still exerting a powerful impact on global financial markets. Given the gloomy forecasts of virologists, the coronavirus has all chances to spread further on. Despite popular discontent, the British government intends to tighten restrictive measures in London and in the north of England. The reason for the implementation of such tough measures is the growing number of coronavirus cases in London and Manchester. The economic costs of the lockdown and varios restrictive measures increase along with the second wave of COVID-19. Given this fact that the British economy will be suffering substantial losses (at least in the beginning) after Brexit, the economic future of the United Kingdom looks quite gloomy. Most likely, the British pound sterling will face difficult times even despite the fact that even the worst scenarios are already partly or largely included in the price of the British currency. It is also fair to say that the UK’s withdrawal from the European Union will have an adverse impact on the euro as well. However, according to the author of the article, this effect will not be as profound as in case of the pound sterling.

Now, let’s conduct a technical analysis of the EUR/GBP cross rate on the weekly time frame. I am convinced that sometimes price charts can provide plenty of useful and accurate information, and often in advance. 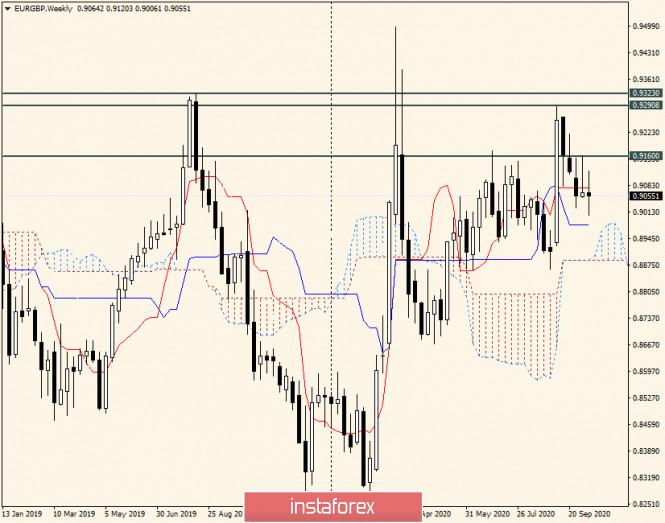 The first thing to pay attention to is strong bearish resistance, which is located near the significant technical level of 0.9300. As we can see, the quote has fallen multiple times trying to break through this mark. Moreover, it happened more than once. In the meantime, at the moment of writing this article, the current weekly candlestick has actually been missing a body, while the existing shadows above and below show the absence of a clear price trend. Most likely, market participants are waiting for the outcome of the EU summit.

Notably, the previous weekly candlestick was formed with a very long upper shadow and a very small bullish body. Usually, after the formation of such candlesticks, the quote goes downward. In addition, the pair is trading near the weekly red Tenkan line. If the current weekly trades are closed above this line, bulls will have the opportunity to resume the upward movement. In this case, the immediate upward target will be the previous high of 0.9160. Otherwise, if the cross apir breaks through the important support zone of 0.9000-0.8980, the bearish movement will be confirmed. Both the psychological and technical level and the blue Kijun line of the Ichimoku indicator are located in this support zone.

I assume that both scenarios are possible at the moment. The closest levels to buy the instrument are in the region of 0.9080-0.9100. Apart from that, this is also the area of 0.9145-0.9160. It is better to open long positions from the 0.9010-0.8980 price zone. In both cases, the best thing to do is to turn to the corresponding candlestick signals in the daily/four-hour/ hourly time frame. Those who do not want to risk are better to stay out of the market for now.

Have a nice weekend!

GBP/USD: plan for the European session on October 22. COT reports. UK ready to make concessions on the Brexit trade deal.