To open long positions on GBP/USD, you need:

In my morning forecast, I paid attention to purchases from the support level of 1.2988 when forming a false breakout on it. On the 5-minute chart, the bulls are quite successfully defending the area of 1.2988, which leads to the formation of a buy signal. However, there was no active upward growth further along with yesterday’s trend and the pair returned to the minimum of 1.2988 after some time. Unfortunately, it was not possible to wait for a good entry point into sales on the test from the bottom up at the level of 1.2988 (I marked this area on the chart). The level of 1.2923 also did not show itself, as it turned out to be incorrect, as a result of which trade began to develop around it closer to the beginning of US trading. 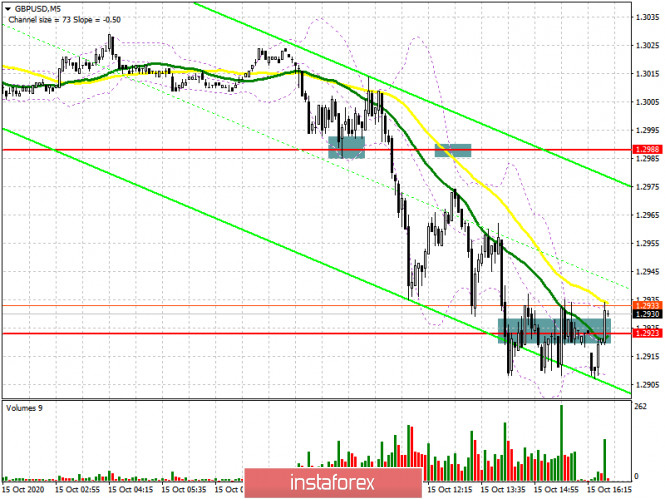 Now the technical picture has changed slightly, and the bulls need to hold the pair above the support of 1.2911. Only the formation of a false breakout at this level will be a signal to open long positions in the expectation of a return to the resistance of 1.2970, where I recommend fixing the profits. In the scenario of a lack of activity at the level of 1.2911, it is best not to rush with purchases, as the pound will have all the chances to return to the support of 1.2865, from which I recommend buying the pair immediately for a rebound in the expectation of correction of 20-30 points within the day.

To open short positions on GBP/USD, you need:

As expected, the rumors about the trade agreement remained rumors, and the pound began to return to its usual level in the support area of 1.2911. Now the bears need to consolidate below this range, the test of which from the bottom up forms a new entry point into short positions with the main goal of returning to the minimum of 1.2865, where I recommend fixing the profits. If the bulls are stronger in the second half of the day, it is best to postpone sales until the correction to the resistance area of 1.2970. I recommend opening short positions immediately for a rebound only from the maximum of 1.3024, based on a correction of 20-30 points within the day. 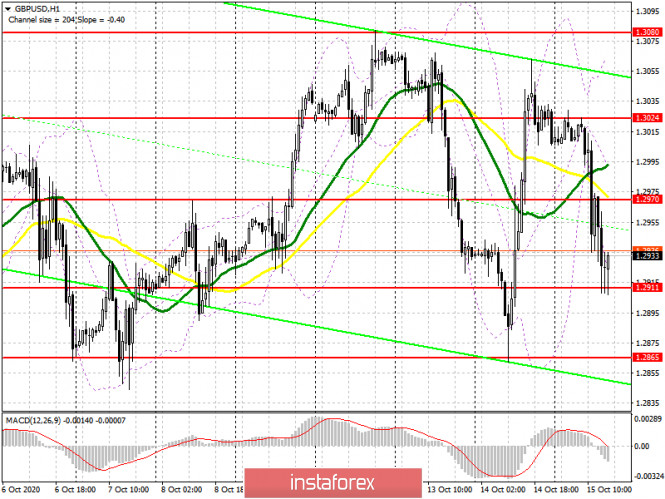 Let me remind you that in the COT reports (Commitment of Traders) for October 6, there was a minimal increase in short non-commercial positions from the level of 51,961 to the level of 51,996. Non-commercial long positions have increased slightly from the level of 216 39 to level 40 698. As a result, the non-commercial net position remained negative and amounted to -11,298 against -12,745, which indicates that sellers of the British pound remain in control and have a minimal advantage in the current situation. The higher the pair grows, the more attractive it will be for sale.

Trading moved below 30 and 50 daily averages, which indicates a possible return to the market of sellers of the pound.

If the pair grows, the upper limit of the indicator will act as a resistance in the area of 1.3065, from where you can sell the pair immediately for a rebound.