To open long positions on EURUSD, you need:

In my morning forecast, I paid attention to several levels, from which I recommended opening short positions. Let’s look at the 5-minute chart and analyze the resulting entry points. At the very beginning of the European session, the bears formed a false breakout in the resistance area of 1.1756, from which the entire fall began. However, even if you are not able to enter these sales, then you could do it without any problems after the breakout and consolidation below the level of 1.1722, the test of which from the bottom up formed an excellent entry point to further reduce the pair. As a result, the next support level of 1.1688 was reached, from which there is now a rebound. It is from 1.1688 that I recommended opening long positions in the expectation of correction of 20-25 points within the day. 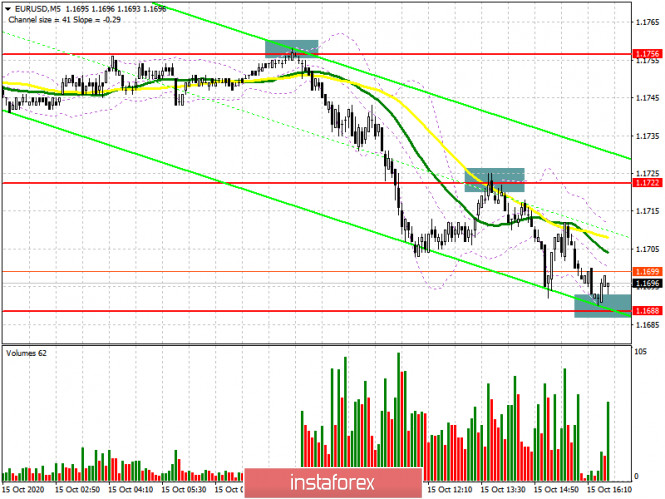 While trading is above 1.1688, it will work out a signal to buy the euro. The main goal of this signal will be to return to the resistance of 1.1722, where I recommend taking the profit. If the pair falls back to the support of 1.1688, I recommend that you exit long positions and not trade against the trend until the new local minimum of 1.1644 is updated, from which you can also watch purchases based on a correction of 20-30 points within the day. If the bulls manage to pick up the resistance of 1.1722, then after its top-down test, you can try to buy the euro in the expectation of a return to the opening level of the day in the area of 1.1756, where I recommend fixing the profits.

To open short positions on EURUSD, you need to:

Sellers coped with all the tasks set in the first half of the day and now all attention will be on the support of 1.1688. Only fixing below this level will be a signal to open new short positions in the continuation of the current trend and to reach a new minimum of 1.1644, where I recommend fixing the profits. If the bulls are more active in the second half of the day, then you can consider new short positions only after forming a false breakout at 1.1722. However, I recommend selling the pair immediately for a rebound only after testing the morning high of 1.1756, counting on correction of 15-20 points. 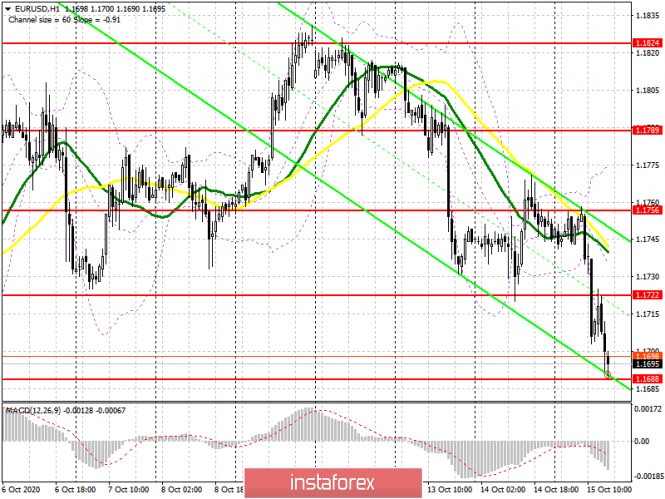 Let me remind you that the COT report (Commitment of Traders) for October 6 recorded a reduction in long positions and an increase in short ones, which led to an even greater decrease in the delta. Buyers of risky assets believe in the continuation of the bull market, however, they prefer to proceed cautiously, as there is no good news on the Eurozone and the pace of economic recovery yet. Thus, long non-commercial positions decreased from the level of 241,967 to the level of 231,369, while short non-commercial positions increased from the level of 53,851 to the level of 57,061. The total non-commercial net position fell to 174,308, against 188,116 a week earlier, which indicates a wait-and-see attitude of new players. However, bullish sentiment for the Euro remains quite high in the medium term.

Trading is conducted below 30 and 50 daily moving averages, which keeps the chance of a further decline in the pair.

In the case of an upward correction, the upper limit of the indicator in the area of 1.1770 will act as a resistance.

Trading plan for the EUR/USD pair on October 16. Second pandemic wave and the US elections.

EUR/USD. October 19. COT report. Traders turn their attention from the US election to the COVID 2019 epidemic in Europe