In my opinion, based on the speech of the head of the RBA, it was kept in neutral-dovish tones. Some experts continue to expect further easing of the RBA’s monetary policy and a reduction in the main interest rate at the end of the next meetings. The reason why AUD/USD was under pressure also includes weak statistics from China, which is Australia’s largest trading partner, as well as anti-risk sentiment that has been observed in the market in recent days. 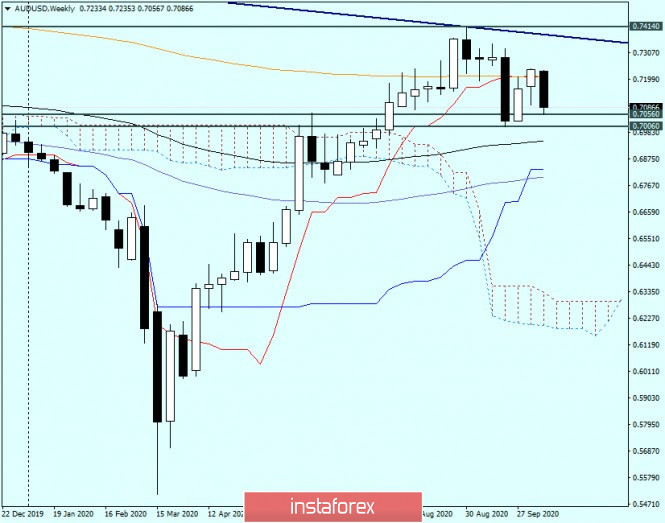 After the previous two-week growth and the closing of the last week above the red line of the Tenkan Ichimoku indicator and the 200 EMA, the pair shows a fairly strong downward trend in the current five-day trading period. However, in my opinion, there are two important levels about the breakdown of which is simply necessary in order to count on a downward scenario in the medium term. The first of these two marks is 0.7100, which is being tested for a breakdown at the time of writing this article. The second level is 0.7000. At the same time, only a true breakdown of the last mark signals a further opportunity to move in a southerly direction.

To implement the bullish scenario, it is necessary to return the price above the red Tenkan line, after which the bulls on the «Aussie» will have to once again test the strong resistance of sellers near the iconic 0.7400 mark, as well as break through the resistance line 0.8136 — 0.7414.

Despite the previous growth forecasts based on the previous week’s closing price above Tenkan and the orange 200 exponential moving average, I believe that the situation has already changed or is changing in favor of bearish sentiment. As already noted, the breakdown of a significant psychological and technical level of 0.7000 will finally confirm this assumption. 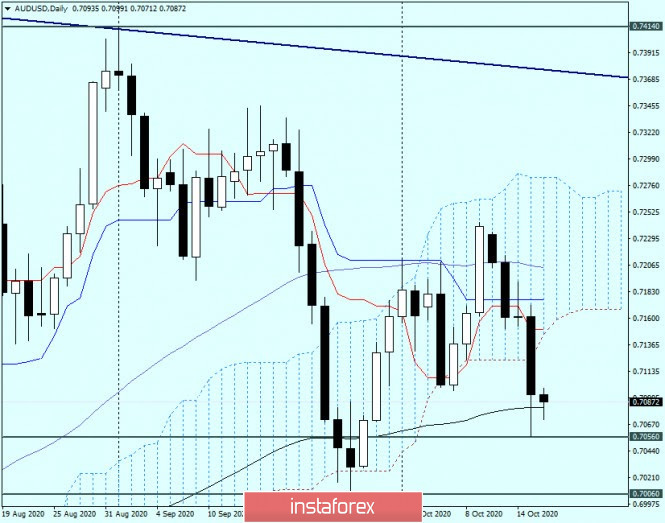 As we can see on the daily chart, the pair fell out of the Ichimoku indicator cloud. Despite the more or less significant lower shadow, the downward scenario has every chance of continuing, which will confirm the update of yesterday’s lows at 0.7056.

In my purely personal opinion, the main trading recommendation for the pair should be considered sales, which are better to open after a breakout of 0.7056 or after a corrective pullback to the broken lower border of the daily Ichimoku cloud, which now passes near 0.7145. More aggressively, you can try to sell the «Aussie» after the price rises to the level of 0.7120. I recommend that you hold off on your purchases for now.

EUR/USD analysis for October 16, 2020 — Potential for the further rise and continuation of the upside trend