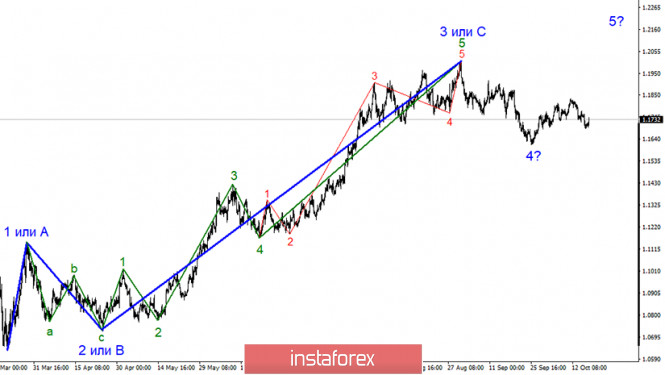 The wave structure of EUR/USD still provides the convincing bullish outlook. Wave 4 looks complete. Thus, the basic scenario is a further climb from the current levels while wave 5 is in progress. Targets are above the high of the suggested wave 3 or C. In other words, the trading instrument is expected to rise at least until 1.2 or even higher. The complications in the wave 4 structure are out of the question now. Interestingly, wave 5 is looking strange because its inner structure doesn’t look like a standard momentum wave. The whole wave could develop a lengthy look. 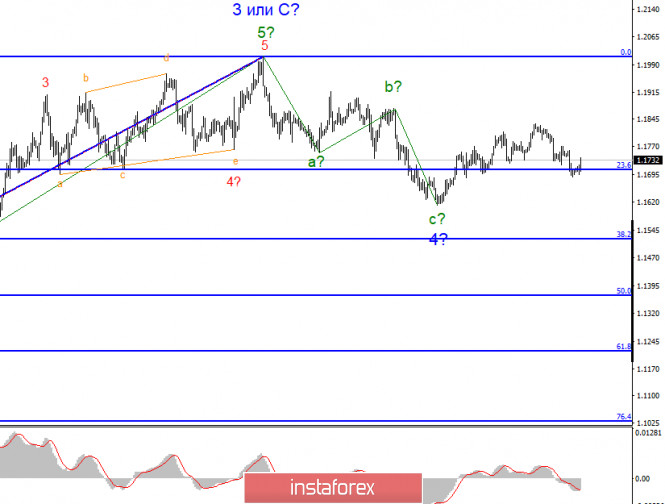 The wave structure on smaller timeframes still indicates that the suggested wave 4 consists of three shorter waves. Perhaps wave 4 has been complete. If it is true, the currency pair will resume its climb inside wave 5. However, in the recent days there are doubts that the ongoing rise is actually development of wave 5. What is actually going on is that wave 4 could be getting more complicated looking like a-b-c-d. The argument for this scenario is that the pair has not made a successful attempt yet of breaking the high of wave b inside 4. This option remains valid until 23.6% fibo is successfully broken.

In the US, market participants are mulling over the presidential elections in 2020. So much has already been said on this topic that at this time it remains only to wait for the elections outcome. By the way, the elections have already begun, since in America there is such a thing as «early elections.» That is, voters who have already decided on their candidate can vote in advance. This is exactly what about 15 million Americans have already done. Of course, there is no point in counting votes at this stage. Joe Biden is taking the lead in all pre-election polls. And nothing more can be said on this topic. Investors have to wait for the election results.

In Europe, the full-blown COVID-2019 wave has begun. In many countries, rampant coronavirus rates pose a grave threat, so the situation is very serious. Above all, this applies to France and Spain, however, in many other European countries very high levels of new cases are recorded. Remarkably, «high» now and «high» in spring are very different concepts. Almost every EU country now reports two or three times higher infection rates than in the spring. For several days, the European currency has been declining. Today, having failed to make a successful attempt to break through the 23.6% level, it is developing a steady rise. Hence, it is too early to say that the COVID-19 resurgence in Europe has put pressure on the euro. So, the main scenario is a further upward wave.

Supposedly, EUR/USD has completed correctional wave 4. Nevertheless, as the high of wave b inside wave 4 has not been broken yet, this prompts a conclusion about complications of the whole wave 4. Thus, I still recommend long positions on EUR/USD with the target at near 1.2012 that corresponds to 0.0% Fibonacci for every MACD signal upwards, bearing in mind further global wave 5. However, in case 23.6% is broken successfully, the alternative scenario comes in play with complications of wave 4.