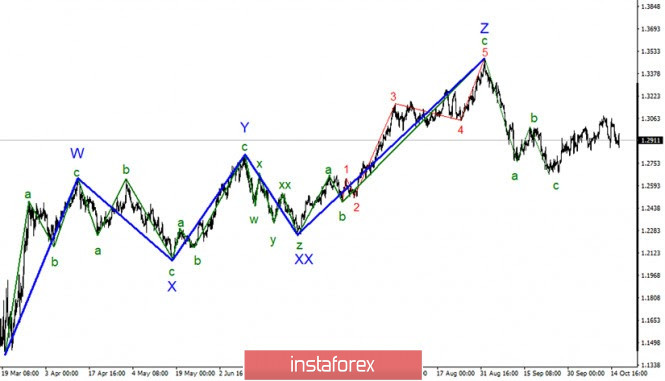 The construction of a new downward trend section is expected to continue. Confidence increases daily that everything will end with abc waves. If this is true, then the price increase will continue from the current levels with targets located near the peak of the z wave. A successful attempt to break through the maximum of wave b also indirectly indicates the readiness of the markets for new purchases of the instrument. However, as in the case of the EUR/USD instrument, the internal wave structure of the upward wave originating on September 23 looks very unusual. 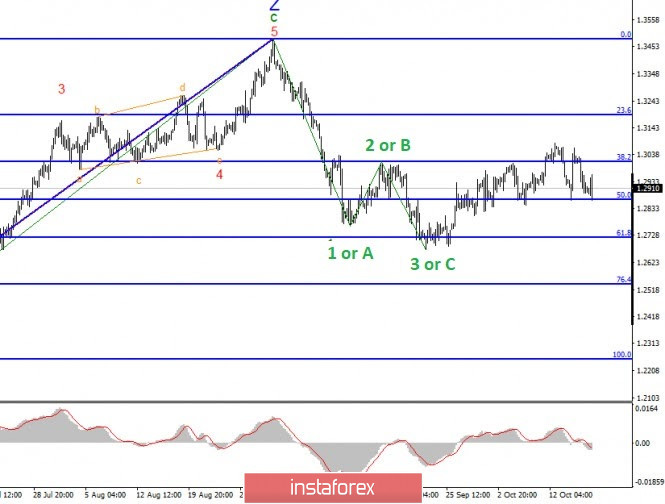 The last few trading days were extremely important for the Pound; at least it seemed like it. The closer the summit itself got, the clearer it became that no decisions would be made during it. Just days before the European Council meeting, many officials said it was unlikely a deal would be reached at all. At the summit itself, it became known that Ursula von der Leyen may have contracted the Coronavirus and subsequently left hastily. After this news, it became clear that no important decisions will be made for sure. Officials in the UK and the European Union continue to simply passing the blame, accusing the opposite side of unwillingness to concede or provide better terms of the deal. Boris Johnson today lashed out at the EU, accusing the Europeans of not wanting to give Britain the same agreement as Canada or Australia. According to the British Prime Minister, his country, after 45 years in the bloc, has earned the right to get a «good deal». The Pound has been jumping up and down during these days but overall, I can’t say that he was too upset about the lack of progress in the negotiations. The fact is that over the past few months, almost every week the markets are witnessing batches of new information about the lack of progress in negotiations. Therefore, these information no longer reflect in the charts.

Economic reports are not exciting for the markets at this time. Today, the figures for retail trade in the United States for September came out. The main indicator rose by 1.9% m/m, although markets expected a weaker increase. Excluding car sales, sales rose 1.5%. It also rose above forecasts. However, the instrument’s quotes still failed to fall below the 50.0% Fibonacci level.

General conclusions and recommendations: the

Pound-Dollar Instrument has presumably completed the construction of a downtrend section. A successful attempt to break through the 38.2% level allows us to recommend buying a tool with targets located near the 1.3191 and 1.3480 marks (which corresponds to 23.6% and 0.0% Fibonacci) for each new MACD signal up. However, the current news background can lead to a strong complication of the current wave markup. As long as the quotes of the instrument are held above the level of 50.0%, the option with the construction of an upward wave remains as the main option.